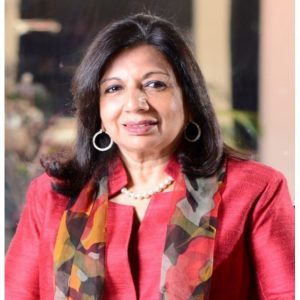 Dr Kiran Mazumdar-Shaw is a pioneering biotech entrepreneur, a healthcare visionary, and a passionate philanthropist. Her vision is to enable universal access to high-quality medical products, particularly to address the global chronic disease burden. She is a pioneer of India’s biotech industry and founder of Biocon, an innovation-led global biotechnology enterprise. Her pioneering efforts in biotechnology have drawn global recognition for both India and Biocon.

A thought leader and a global influencer, she has been named among TIME magazine’s 100 most influential people in the world and ranked among the ‘World’s 25 Most Influential People in Biopharma” by Fierce Biotech. She is the only Indian on the Forbes list of ‘World’s Self -Made Women Billionaires’ arid has featured on the Forbes list of ‘World’s 100 Most Powerful Women continuously since 2010. She has also been on Forbes ‘Asia’s 50 Power Businesswomen`s list and Forbes India Rich List.’

The Scientific American magazine listed her on its the Worldview 100 list of most influential visionaries and Fortune magazine named her among the ‘Top 25 Most Powerful Women in Asia -Pacific.’ She topped the ‘Medicine Maker Power List 2018, In the Business Captains category, an index of the 100 most influential people across the globe in the field of medicine.

Dr Mazumdar-Shaw was awarded the U.S-India Business Council Global Leadership Award at the USIBC India Ideas Summit 2018, in recognition of her contributions and leadership across roles and sectors. She was felicitated with the ‘Advancing Women in Science and Medicine (AWSM) Award for Excellence’ 2017 by The Feinstein Institute for Medical Research, US.

She was bestowed with ‘The Global leadership in Engineering Award’ by USC Viterbi School of Engineering in 2016 for excellence in biotechnology worldwide and the Chemical Heritage Foundation gave her the Othmer Gold Medal in 2014. She has also been conferred with the highest French distinction, ‘Knight of the Legion of Honour’ in 2016, and ‘The Global Economy Prize for Business’ in 2014 by the Kiel Institute for the World Economy, Germany for her outstanding contribution and dedication to the biosciences and research field globally.

She is the proud recipient of India’s two highest civilian honours – Padma Shri in 1989 and Padma Bhushan in 2005.
In the US, she is a full-term member of the MIT Corporation, the board of trustees of Massachusetts Institute of Technology (MIT) and is also on the advisory board of the recently established Abdul Latif Jameel Clinic for Machine Learning in Health at MIT (J -Clinic), US, which seeks to transform healthcare with artificial intelligence and machine learning. She serves on the board of advisors for The National Society of High School Scholars, US, and is on the board of trustees of the Keck Graduate Institute in the US. She has been elected as a member of the prestigious US-based National Academy of Engineering (NAE) for her contribution to the development of affordable biopharmaceuticals and the biotechnology industry in India.

Dr Mazumdar-Shaw believes in compassionate capitalism and is the first woman business leader from India to sign the Giving Pledge, an initiative of the Gates Foundation, committing to give most of her wealth to philanthropic causes. She is very passionate about innovation and mentors many science-based start-ups.